You are here: Home / Musings / Flowers and a life lesson from my toddler 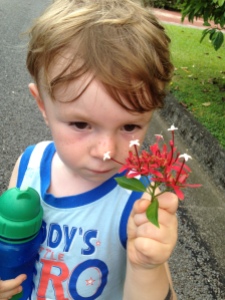 Who could refuse flowers from that face!

A big thing happened at playgroup this morning.  My toddler loves flowers at the moment – although he still can’t say the letter F so it sounds like he wants a shower (his pronunciation of the work sock which kind of sounds like suck often has me wondering..…)

So he picks some lovely flowers outside this new playgroup we went to and wanders inside to meet some new friends – he saunters over to a much older kid (in my mind he was about 15 but I’m pretty sure in reality he was about 4) and offers him one of his prize picks. My heart too was blooming as I saw him standing there offering up his little flower almost as a question – please take my gift and be my friend! So when this almost teenager (almost pre-schooler) snatched the flower up, smushed it in his ogre hands and threw it on the floor my heart broke a little. I was angry – did this child not realise what was being offered? I wanted to go over there and stuff the squashed petals up this young man’s nose.

This was absolutely my first experience of someone being anything but nice to my son and it has opened up a whole load of questions for me – do I step in? Stand by and let them figure it out? Start a fight with the other kid’s mum just to set a good example?  Just like I was not ready for the antics of a newborn I am definitely not emotionally prepared to see my teeny tiny firstborn take his first social steps and be at the mercy of big bruiser bully kids in the playground.

But then something occurred to me and I looked over at my toddler to see how he had taken it – and once again I learned another lesson from my kids – he’d moved on. With an almost shrug of the shoulders he’d strolled back outside to pick another flower for his next new friend.

And later on as I watched my innocent boy steal a Tonka truck off a boy twice his size and try and hit a girl on the head with a plastic spade,  the realisation came that he was going to be just fine in this big wide world. (you will still find me, however, collecting squashed flowers and trying to fight other mothers)

Find your next Aussie Adventure

Enter your name and email to get our monthly newsletter... it's FREE!

Join our adventures around Australia! Family and pet friendly travel tips - as well as news of the latest travel deals and discounts.
Your information will *never* be shared or sold to a 3rd party.